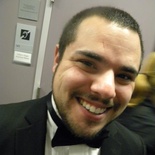 Christopher Krzeminski is currently a student at West Chester University of Pennsylvania where he is pursuing a degree in music education. His primary instrument is euphonium. Chris is a member of the West Chester University Golden Rams Marching Band where he is the current section leader, Symphonic Band and Concert Bands, and the Tuba/Euphonium ensemble. While living in northern New Jersey Chris was a member of the North Jersey Concert Band where he was principal euphonium. Chris is an active supporter of the marching arts. He was a member of the nine time world champion Hawthorne Caballeros from Hawthorne, NJ. Chris has also taught several high school marching bands across North Jersey.