ABOUT THE COMPOSER (VIRGIL W. BORK) 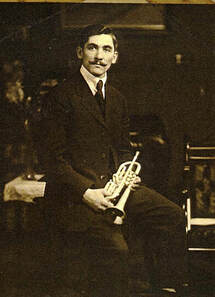 Virgil W. Bork
Virgil Walter Bork (b. Zakszow, Poland, 1892, d. Roselle, New Jersey, 1972)
​​After a harrowing escape from Russian-controlled Poland at the age of 10, Virgil joined his father working in the coal mines near Clarksburg, West Virginia (yes, at 10 years old!). He showed an interest in music and his father bought him a cornet from a Polish army musician who also taught Virgil the basics of playing.  As a young adult he was introduced to an Italian musician, who recognized his potential and took him under his wing as a student. While still working in the mines, Virgil began to teach students of his own and formed his first band in Clarksburg, WV, in 1913.

The musical group that Virgil Bork recalled as “my best band” had its origins in part in Americas worst mine disaster. On the afternoon of December 6, 1907, explosions rocked Consolidated Coal Company’s interconnected Number 6 and number 8 mines at Monongah, leaving at least 361 men and boys dead (all but one of the miners), approximately 250 widows, 1000 orphans   and a huge hole in the social fabric of the community, which only had a population of 3000. . Many of the miners killed in the blasts were close friends of Bork and his band members and the tragedy shook them all deeply. “Since we lived in the vicinity, we reached the scene the very morning the catastrophe occurred”. Some years later, as the Marion County (West Virginia) town was pulling itself together, he organized a band of youths many of whose fathers had lost their lives in the underground disaster. This was to emerge as the Monongah Miners’ Band.  The band was officially organized in 1915 and hired Mr. Bork as its director in 1916.  He held the post until 1931. The band itself stayed together much longer, playing at United Mine Workers national conferences as late as 1968, finally disbanding about 1985.

Shortly after the organization of this band, serious labor troubles developed. The coal companies broke their agreements with the miners, and this brought about strikes, walkouts, mass meetings, and evictions. The young band, since it was supported by the local union, was called on to furnish music at one of the first of the miner’s meetings. The band made a tremendous hit and became the official United Mine Workers’ Band. John L. Lewis was holding meetings right and left, and the band was continually called upon to play at these meetings.  That band traveled five days a week and was one of the busiest bands in the country.

John L. Lewis, in a speech before the UMW of America in Indianapolis (1924) said, “Not the least among the ardent workers for our cause was the band of Monongah, West Virginia.” The succeeding speaker said of the band,
The members of the band were serious supporters of the union, and on occasion found themselves in jail for playing on the picket line. Many of the members of this band have been thrown into jail for alleged violations of injunctions while playing on the picket lines at the mines in Northern West Virginia. This band had played for us day and night. They have appeared on the picket lines at three o’clock in the mourning; they have been there in the evening; they have worked with us for the strengthening of our organization.

Casey Bork has found parts of other V.W. Bork marches from this United Mine Workers’ Band era with names that reflect the struggle; No Backward Step, On the Picket Line, and Stand Firm. Maybe the future will bring more of the parts to light leading to complete renderings.  A cornet/conductor part of this march indicates a composition date of April 21, 1918.

Parts of this biography have been taken from Goldenseal Magazine and Etude Magazine. 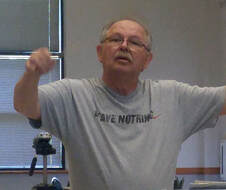 Casey (Casimir) V. Bork, Jr.
About the Editor
Grandson of Virgil W. Bork, Casey (Casimir V. Bork, Jr.) is the third generation of music educators in this family. According to Casey, his father, Casey Bork, Sr. was the man who continued the music legacy and organizations started by VW Bork.  Casey said, “I was fortunate to learn about music and life from these men”.
When V.W. Bork moved his family to New Jersey in 1930 and started teaching/directing in the Roselle public schools, he founded the Union County Band and Orchestra Summer School (UCBOSS) in 1933. He used the United Mine Workers March as the school march and renamed it U.C.B.O.S.S.  Casey commented “I grew up knowing this march only by that name.”
He explained “U.C.B.O.S.S. had no score and all the parts were handwritten, and often disagreed with each other.  Having played the piece under my Father’s and Grandfather’s baton so often, it was relatively easy to make decisions as to what was right.”
A graduate of Rutgers, Casey is a Vietnam veteran who taught public school instrumental music and restarted and ran the Eastern Conservatory of Music and Arts. He also founded and is Conductor Emeritus of the Whitehouse Wind Symphony in New Jersey.  After retiring to North Carolina, he directed the Gaston String Orchestra, resurrected the High Society Ragtime and Dixieland Bands, founded the Blue Ribbon Concert Band, and participates in, writes for, and directs other organizations in the Charlotte area.