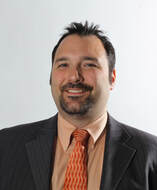 Joseph J. Verderese, Jr. of Norwood, NJ is a Middle and High School instrumental music teacher in the Cresskill School District (NJ) since 2005.  He graduated with a B.S. in Vocal & Instrumental Music Education from West Chester University of Pennsylvania in 2003, where he was the student director of the Incomparable Golden Rams Marching Band as well as the WCU Criterions Jazz Ensemble & Jazz Combo.  Joseph continued his education at Manhattan School of Music, where he received his Masters Degree in Jazz Studies in 2005.

While teaching in Cresskill, NJ, Joe is responsible for the 7th and 8th Grade bands as well as the High School Band.  In addition to these large ensembles, he also directs the HS Marching Band, MS & HS Jazz Bands, Pit Orchestra, String Ensembles, various chamber groups and Rock Band.  He also serves as the co-advisor of the Tri-M Music Honor Society and Ski Club.
In 2008, Joe co-founded an 18-piece big band named One More Once.  Through the years, the band has created over 60 educational events bringing local middle school, high school and college bands to the stage with some of the greatest jazz musicians in the world.  Since 2012, the band has collaborated with artists such as Wycliffe Gordon, Jaleel Shaw, Rufus Reid, Ingrid Jensen, Gary Smulyan, Conrad Herwig and Slide Hampton, and many more.
​
Mr. Verderese has had the opportunity to contribute to music education throughout the county, region and state. In 2010, he was honored to conduct the Bergen County Middle School Honors Band and in 2014, he directed the Region I Junior Jazz Band. In January 2017, Mr. Verderese led the Bergen County High School Band.   He spent 3 years as coordinator of the MEBCI Elementary School Band Festival and 4 years as the coordinator for the MEBCI Middle School Jazz Festival. In addition, Mr. Verderese is now the secretary of the New Jersey Association for Jazz Educators and serves on the Board of Directors for the North Jersey Band Festival, held annually at Montclair State University.
​
When away from the baton, you can find Joe at a Yankee game, grabbing a slice of pizza, listening to sports radio, binge-watching his favorite TV shows and most importantly, spending quality time with his wife and 2 kids.
ORIGINAL WORKS COMING SOON!